The Barnegat Police Department first opened its doors at 8:00am on Tuesday, July 3rd, 1973. The agency started with just three officers: Chief William Brazzel, Patrolman Kenneth Vogel, and Patrolman Harold Powell. The early Barnegat PD patrolled the Township from 8am to midnight.

The first police department headquarters was located on West Bay Avenue near Route 9 on the second floor of what was then the municipal building. That building was originally constructed in 1910 as Barnegat’s first post office. 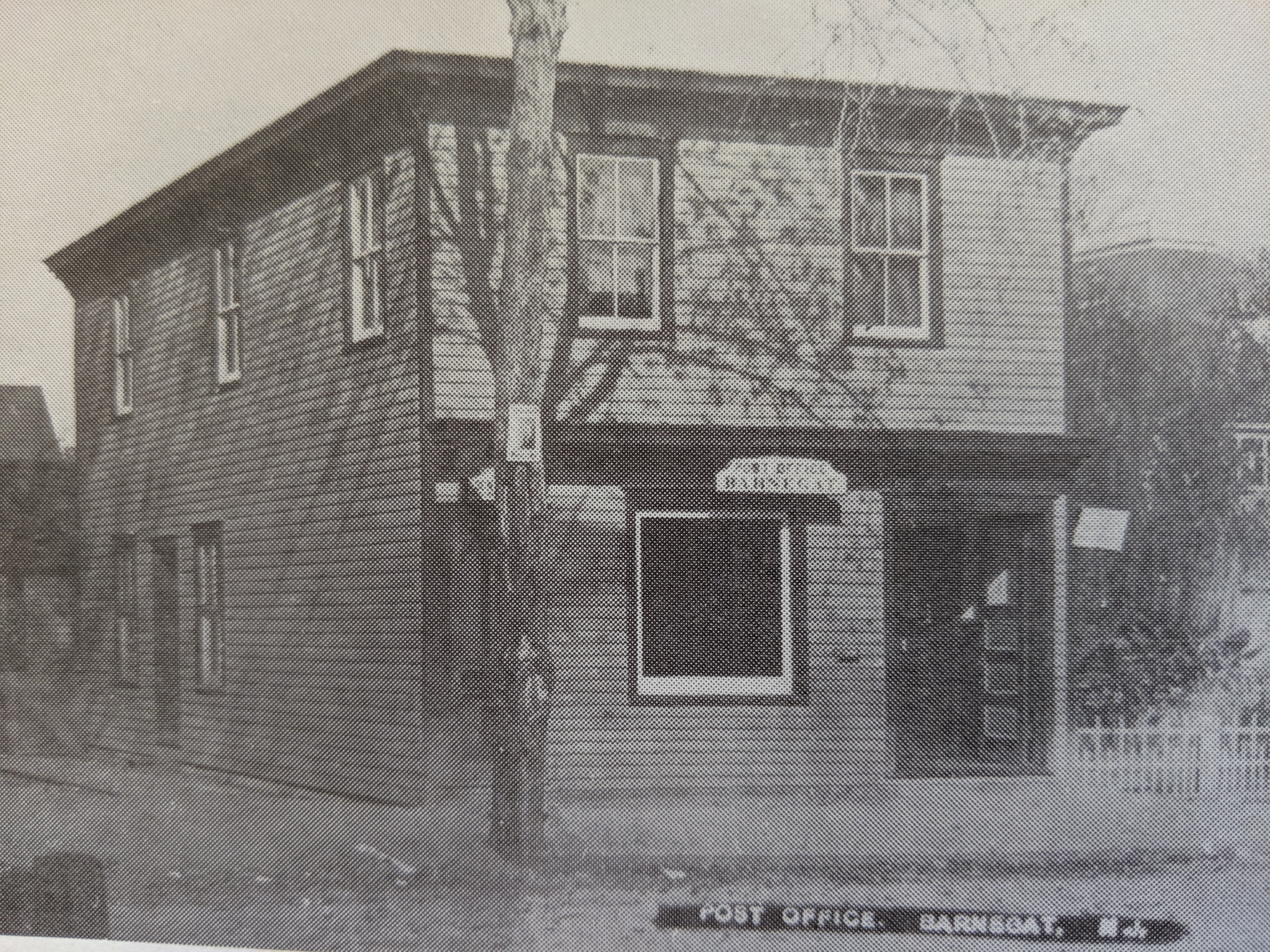 More officers would be added during the 1970s as the town’s population steadily grew. Some of those early officers would have a large impact on the future of the agency. Ed Smith and Joe Manger, both veterans of the Woodbridge Police Department would leave Woodbridge PD for jobs in Barnegat. Both would become Chief; Chief Smith in 1979, and Chief Manger upon Smith’s retirement in 2004.

By 1977, the town’s population had grown to 8,000 and the department had grown to eight patrolmen, two lieutenants, a captain, and a detective.

In 1979, Edward Smith was appointed Chief of Police.

In 1981, the department moved to its current location at 900 West Bay Avenue. Other than a small addition, the building that housed the agency’s 14 officers in 1981 is the same one that houses the 51 officers who work for the department today. 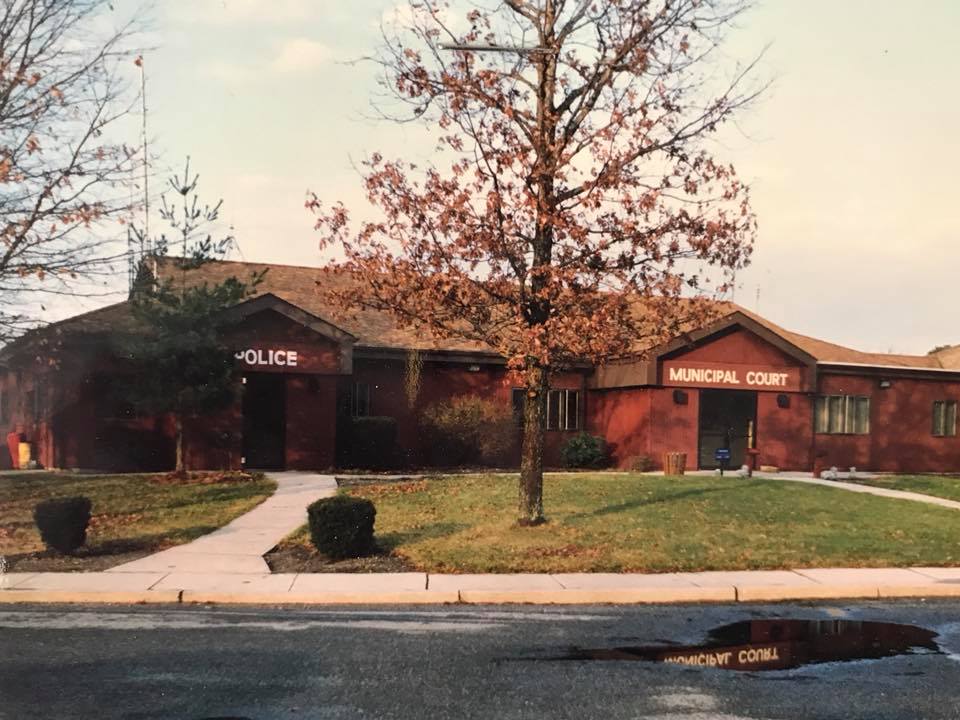 Barnegat PD headquarters, circa 1980s. This building was originally the sales office for a local development.

In June of 2000, Captain Kenneth Vogel, one of the original three officers, became the first officer to retire from the Barnegat Police Department after 25 or more years of service.

In 2004, Barnegat PD transitioned fully from shotguns to patrol rifles (Colt M4) becoming what is believed to be the first agency in New Jersey to deploy patrol rifles as the only agency long guns.

In 2004, Barnegat PD installed mobile data computers in all of its marked patrol cars, vastly increasing officer capabilities and efficiencies while in the field.

In 2005, Joseph Manger was appointed Chief of Police. Manger was a veteran of Woodbridge PD before joining the Barnegat force in 1975. Manger started the Detective Bureau within the Barnegat Police Department as the first detective and created many of the processes and procedures still in place today. With his appointment as Chief, Manger represented the first change in leadership for the department in over two decades. Manger engineered the first major restructuring of the department’s organizational structure since its inception and was the driving force behind the professionalization of the police department through the pursuit of accreditation.

In March of 2005, Barnegat PD issued QuikClot Hemostatic Agent to its officers, becoming one of the first agencies in the state to provide the unique treatment for traumatic bleeding control.

In December of 2006, Arthur P. Drexler was appointed Chief of Police.

In 2007, Barnegat PD installed mobile video recorders (MVRs) in all of its marked patrol cars, becoming one of the first agencies in Ocean County to fully adopt mobile cameras.

In November of 2011, Barnegat PD was awarded international accreditation from CALEA (Commission on Accreditation for Law Enforcement Agencies), becoming the first agency in the history of Ocean County to be CALEA accredited (and one of only seven CALEA accredited municipal police agencies in the State of New Jersey).

Today, Barnegat PD remains the only CALEA accredited agency in Ocean County, having successfully earned re-accreditation in 2014 and 2017.

On February 1, 2012 Barnegat Ptl. Lauren Keilitz and Ptl. Michael Diblasi were featured on a live morning segment of Fox and Friends in New York City for the rescue of a man trapped in a burning vehicle. Ptl. Keilitz was able to get the car open and pulled the unresponsive man free of the vehicle as it was engulfed in flames. This marked the first time that a Barnegat Police officer appeared in a live, national news studio broadcast.

On February 9, 2016, Barnegat Township entered into an agreement with the Ocean County Sheriff’s Department to provide dispatch services for the agency.

In July of 2017, Barnegat PD saw the first change in uniform since 1977, moving from the concealable vest and French blue button-down shirts, to the Cowell external vest carrier with French blue Blauer Armorskin shirts. This move allowed for the transfer of equipment and weight off of the duty belt to the load-bearing vest– a move that studies showed reduced injury to officers and on the job injury claims.

In November of 2018, Barnegat PD adopted a new patch and logo featuring the Half Moon, the ship on which Henry Hudson was sailing near Barnegat Inlet when the Dutch initially settled and named our area Barndegat.

In December of 2018, Barnegat PD began mandatory use of body worn cameras for all uniformed officers assigned to patrol duties.

On March 5, 2019, MaryAnn Cirulli was promoted to sergeant, becoming the first female sergeant in the history of the agency.

In June of 2019, Barnegat PD began deploying the Axon Taser X2 as a form of enhanced mechanical force, increasing the available force options for officers on dangerous calls for service.

In January of 2020, Barnegat PD launched its new sUAV (drone) unit with the addition of a DJI Matrice 210 sUAV equipped with FLIR thermal imaging and 300x zoom optics. The sUAV can be used for missing persons or suspect searches, surveillance, scale MVA diagramming, and special event or critical incident situational awareness.

On October 6, 2020, the Barnegat Township Committee awarded a bid for the construction of a new police headquarters and town hall. The bid was awarded to Frankoski Construction Company of East Orange, New Jersey.

In October of 2020, the agency launched its Precision Policing Initiative. Precision policing is a systematic and proactive approach to ensuring public safety. It organizes a police agency’s structure around data and information to build investigations of high value suspects committing the most crimes. It involves a more
collaborative inter-agency cooperation, but also a strong focus on community collaboration. Precision Policing is built upon the foundation of two primary components: Focused Enforcement and Neighborhood Policing.

The establishment of Neighborhood Policing Zones marked the first significant change in patrol zones and assignment of areas of responsibility in more than four decades.

Barnegat started as a bayside village whose inhabitants historically made their living and often survived off of the sea. When Henry Hudson first anchored off of Barnegat Inlet on September 2, 1609, it was recorded in the ship’s log that this area was “a very good land to fall in with, and a pleasant land to see.”

Hudson’s visit led to a series of explorations by Dutch ships and explorers and led to the first European settlers here. It also resulted in the area being named Barndegat– a Dutch word meaning a pool created by a dike breach– which morphed into our present-day name of Barnegat. To read about the history of the name “Barnegat,” and why it does not mean an “inlet of breakers” follow this link.

Hudson’s ship during that first visit was the Halve Maen (Half Moon), a Dutch vlieboot (flyboat). It serves as the centerpiece of the new patch. Flying on the stern of the ship is the Prince’s Flag, which flew on Dutch ships of that period.

The Prince’s flag influenced several official flags in the area including the flags of New York City, Albany, Jersey City, Bronx, Albany, and Hofstra University, among others. In our case, its colors serve as the basis for the orange in the outside of the patch and the blue of the water.

The patch retains a shape similar to the 1977-2018 Barnegat Police patch as a nod to its longevity during all but the first few years of the agency’s existence.